All Collections
Copy Trading
How to choose a Trader to copy?

How to choose a Trader to copy?

Best practices to find the right trader to copy on NAGA Help Center❓If you have questions, please contact our Support Team

Written by Support Team
Updated over a week ago

👉🏻 Read how to start Autocopying here.

The easiest way to find a good trader for Autocopy is by visiting our Leaderboard🏆. Once you open Top Traders, users are sorted by Profits Made (Sum of gross profit made on NAGA). You can change the sorting parameter or choose additional filters to narrow the results. After you have identified a top trader of interest from the Leaderboard, you can visit this user’s profile page and see his/her bio, trading statistics, feed posts and trading history.

Right under a user's name, you can see a trader’s Win Rate. This statistic tells you the percentage of winning trades as compared to the total number of trades. For example, the user on the screenshot below has a win rate of 97.20%, meaning that for every 100 closed trades, the user closed 97 trades with a profit. 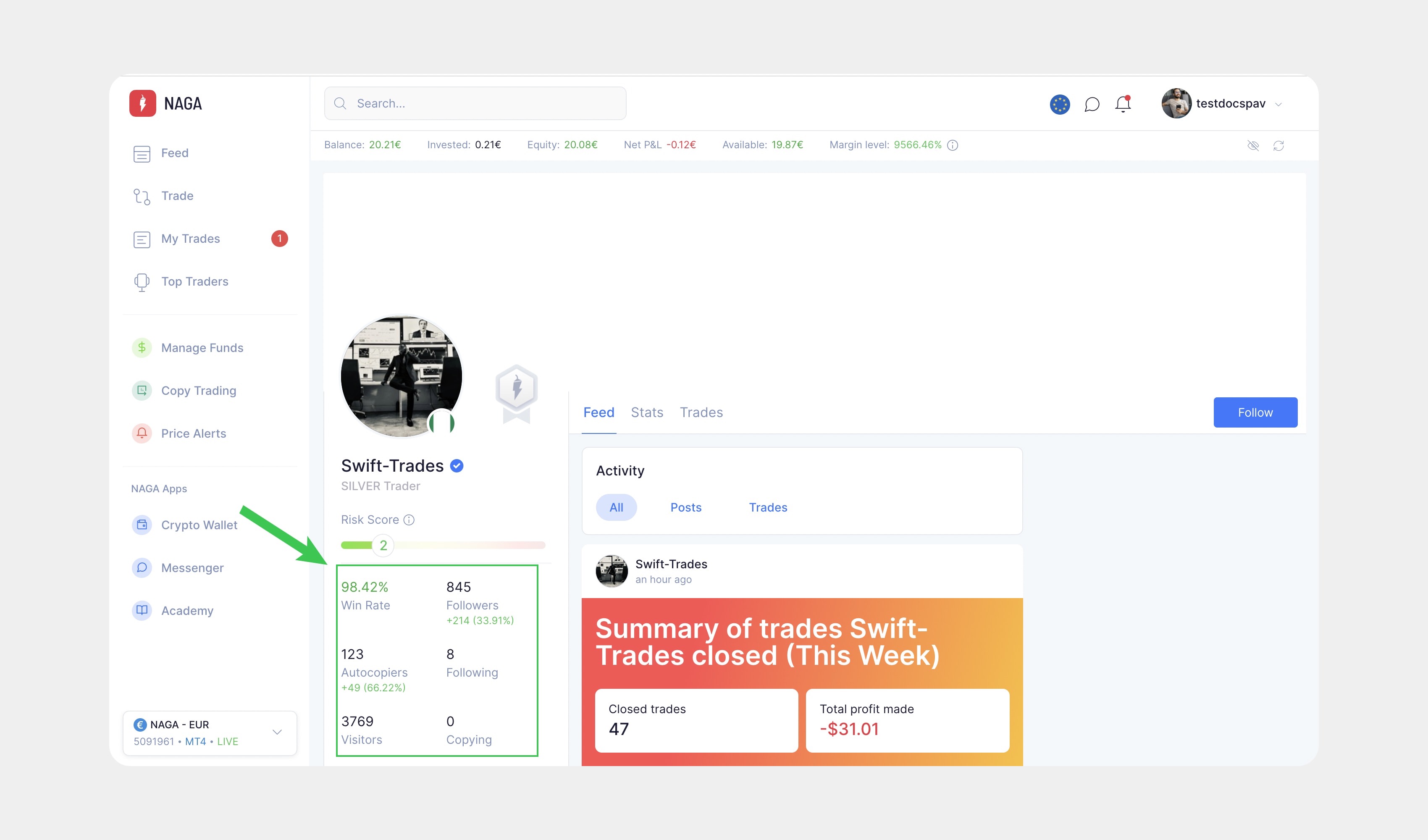 Just below the win rate, you will see some other statistics:

Here you can see a user's social activity: statuses published by a trader or related to him. For example, it can be a notification about opening a trade, a new Copier or any other.

👉🏻 Read this article to find out more about the NAGA Feed.

This section contains a user's trading statistics. The chart along the top will show the historical performance for the time period selected.

In this case, we are seeing Galilea's “All-time” performance which shows that after 1,354 trades Galilea has had 1,316 winning trades with a total profit of more than $140,832. ❕ Note that the profits don’t just include only his trades, they include trades he has copied from other users.

💡Here are some calculations that are used throughout the stats page:

This section is very helpful for understanding what a leader trades. For example, the above leader does 58.35% of his trades in GER30 (DAX). He also trades NAS100 (Nasdaq) and a few other instruments.

It also illustrates a breakdown of the leaders winning vs losing trades. The average profit per trade is significantly lower than the average loss per trade, but there are more than 35 times more winning trades than losing ones.

Here you can also see an average number of trades per week and a percentage of profitable weeks.

Active Since is the day the user’s account was opened with NAGA.

In the “Trades” section you can see the last 20 closed trades by a user. This information can provide further insights into the types of instruments and sizes that the user trades as well as their recent performance.

❗️Make sure you've done profound research of a trader's activity before copy trading him or her. In the end, we are providing you with this powerful tool and you are the one who chooses whom to copy!

Did this answer your question?